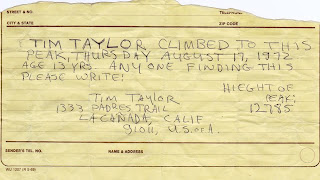 
Tim Taylor's handwritten note was discovered by 69 year old Larry Wright with his son and grandson on 9/8/12. You can read the story by Reporter Dina Abou Salem here; and an update here.


One comment caught my attention… “You can’t leave a legacy like that with a text! …He used an ancient technology called a PENCIL.”

– Combined with a small piece of PAPER – he PLANTED his SEED in an ancient art form called WRITING!

Decades later, it is found – still in contact with the soil it was planted in.

This SPEAKS volumes to me today. The note was written on two very significant dates in the history of my life. I am a writer – a lover of the written WORD!

This ancient technology survived the test of TIME!

In its finding…it physically connected 4 generations…with the watching world! For some unrevealed reason, I am filled with HOPE today. HOPE for new HUMAN CONNECTIONS… RESTORATIONS….and REAVEALED DREAMS.

Was this just happenstance – or a God appointed find? I can’t say. But we are all connected in some way to each other and the world around us through the Creator God. We may not be privy to how it unfolds. But a door has been opened. Opportunities are there that were not there before the find. These opportunities were planted as an unknowing SEED of HOPE… 4 decades ago. This seed of HOPE was planted by a young teen in expectation of a HARVEST. The very words on the note reveal such. The very fact that he wrote the note, sealed it in a waterproof canister, and buried it….shouts of an expected HARVEST!

May his NOW HARVEST overwhelm him with new opportunities of JOY…and unknown EXPECTATIONS. May he continue to plant with expectations for tomorrow's find.

In this deeper LIGHT…


I am compelled to ask myself …
“What am I planting – for tomorrow’s FIND?”

May I take this opportunity to ask the same question of you?...
“What are you planting – for tomorrow’s find?”

Seeds fall to the ground all the time…some are picked up by the wind and blown for miles and miles – on wings of the air we breathe. Others lay stagnant in the rocks - incapable of making contact with the soil. But there are those SEEDS that are intentionally PLANTED – carefully placed and protected by a prayer...an expectation... a promise or  hope.  Those are the SEEDS that Birth a HARVEST….even generations down the road.

Protect your seed! It is priceless. Intentionally PLANT…..and in your planting, EXPECT the HARVEST to come! One tiny seed has the DNA and the capacity to bring about a full Harvest.


This same ancient art form was used to establish the life and ministry of JESUS CHRIST - the one and ONLY Son of God - who also walked this earth – its peaks and its valleys. This Christ spoke WORDS of LIFE to the waiting, watching, seeking world. It was recorded by this same ancient art form –in what is known as the HOLY BIBLE…the inherent WORD of God. It too has stood the test of TIME. Generations yet unborn will read it - and new HOPE will be birthed in their hearts… with its hearing!

Read a portion of this JESUS’… PLANTING - a message He planted in the hearts of men, women, and children of His day – for such a time as this.

Recorded by Matthew, a tax collector in Matthew 13:1-23 (NIV of the HOLY BIBLE)

The Parable of the Sower


1 That same day Jesus went out of the house and sat by the lake. 2 Such large crowds gathered around him that he got into a boat and sat in it, while all the people stood on the shore. 3 Then he told them many things in parables, saying: “A farmer went out to sow his seed. 4 As he was scattering the seed, some fell along the path, and the birds came and ate it up. 5 Some fell on rocky places, where it did not have much soil. It sprang up quickly, because the soil was shallow. 6 But when the sun came up, the plants were scorched, and they withered because they had no root. 7 Other seed fell among thorns, which grew up and choked the plants. 8 Still other seed fell on good soil, where it produced a crop—a hundred, sixty or thirty times what was sown. 9 He who has ears, let him hear.” 10 The disciples came to him and asked, “Why do you speak to the people in parables?” 11 He replied, “The knowledge of the secrets of the kingdom of heaven has been given to you, but not to them. 12 Whoever has will be given more, and he will have an abundance. Whoever does not have, even what he has will be taken from him. 13 This is why I speak to them in parables:

(Matthew’s bio – a tax collector and disciple of JESUS - ‘As Jesus went on from there, he saw a man named Matthew sitting at the tax collector's booth. "Follow me," he told him, and Matthew got up and followed him.’ Matthew 9:9)


prayerfully submitted
by His Warrior Bride in Boots,
Patrina's Pencil