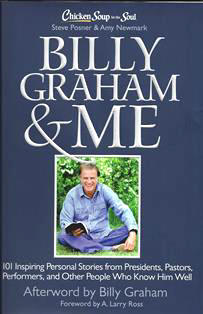 “Chicken Soup for the Soul: Billy Graham & Me,” (Steve Posner and Amy Newmark)  will be distributed through Simon & Schuster, and released Feb. 12, 2013.

The book is a one-of-a-kind anthology containing personal stories from world leaders, including every living president, celebrities and the people who know him best.

A. Larry Ross, who has who has been serving as director of media/public relations and principal spokesperson for Billy Graham since 1981- wrote the foreword for this book.

"Since 1993, Chicken Soup for the Soul one of the world’s most iconic, recognizable and trusted brands, renowned for sharing uplifting stories -- has inspired readers all over the world with more than 500 million copies of its 250 or so titles, translated into more than forty languages.

But the book you hold in your hand is unique and unprecedented, marking the only time in its twenty-year history that the Chicken Soup for the Soul series has focused on a single individual -- evangelist Billy Graham. Regardless of your familiarity with Mr. Graham or your identification with his message, more important than the person are the transferable principles by which he lives his life.

Billy Graham faithfully preached a timeless message in a timely way at the intersection of faith and culture. He put the green grass of the Gospel down low where “even the goats could get it,” showing how the Bible speaks to personal and societal problems, and always providing an opportunity for audiences to respond by making a personal faith commitment.

Just as Billy Graham’s influence and impact transcends religious, racial and political boundaries, so does the list of contributors to this volume as they reveal and confirm his place in history. Prominent Christian pastors, leaders from other faiths, celebrities, heroes, regular citizens -- and remarkably, every living U.S. President -- collectively document the effects of Mr. Graham’s worldwide ministry over more than six decades.

Contributors include a sheer diversity of leadership representing myriad professions, geographical locations, political persuasions and faith traditions, all of whom coalesce around the common denominator of utmost respect for one individual --including those who do not share his perspective or worldview.

Considering the current polarization and politicization of our nation, it is extraordinary to have voices from all walks of life, representing a full spectrum of ideology and methodology, joined in praise for an inclusive Christian leader known for unwavering conviction in a biblical worldview. During this arguably unparalleled period of divisiveness in America and our world, there is, perhaps, no other individual who has been able to unite diverse people like Billy Graham has."

Larry  honored Mr Graham as an icon of utmost respect...

Contributors... "...coalesce around the common denominator of utmost respect for one individual -- including those who do not share his perspective or worldview."

Quoted contributors from the book....

President Obama describes Billy  “a man whose faith had changed the world and had sustained him through triumphs and tragedies, movements and milestones, who was warm and welcoming to all. This man who had prayed great prayers that inspired a nation, this man who seemed larger than life, greeted me and was as kind and gentle as could be.”

“I was captivated by Billy, he had a powerful presence, full of kindness and grace, and a keen mind…In his gentle, loving way, Billy began to deepen my shallow understanding of faith. ‘There’s nothing wrong with using the Bible as a guide to self-improvement,’ he told me. ‘Jesus’ life provides a powerful example for our own. But self-improvement is not really the point of the Bible. The center of Christianity is not the self. It is Christ.’”   ~  President George W. Bush

“He was constantly broad-minded, forgiving, and humble in his treatment of others, He has reached out to all people – black or white, American or foreign, man or woman – for opportunities to serve God."   ~  President Jimmy Carter


"I know Billy’s crusade didn’t abolish racism or the periling vestiges of segregation, But he showed us that by following our faith we would move the rock up the hill…that faith is Billy Graham’s great gift to the world.”  ~  President Bill Clinton

“The spiritual generosity that Mr. Graham preached celebrated a universal message of love and compassion that people of all faiths can embrace.”~  Catholic Cardinal Timothy Dolan

You are invited to use the comment section below to describe what Billy Graham  - the man - and/or his ministry as a Christian Evangelist has meant to you. I will be addressing his impact on my Life in Part 2 of this post 'Billy Graham & Me'.

Thanks for taking the time to honor Billy with your words.

A portion of the proceeds
from “Chicken Soup for the Soul: Billy Graham & Me,”
will be donated to the Billy Graham Evangelistic Association.

My Thanks is given to ...
SOURCE - Dan Wooding
Founder of ASSIST Ministries
‘Chicken Soup for the Soul: Billy Graham & Me’
Receives Authorization from Billy Graham to Create Unique Tribute